Used extensively the world over for several decades, low modulus silicone sealants (often known as low mod silicone or LM silicone), is a mainstay for many different trades in the construction industry for both installation and remedial works. As a result of low mod silicone’s reliability and popularity, there is now a wide variety of products available.

In general, low modulus sealants are preferred, especially in high moving joints such as window frames or expansion joints.

When a low modulus silicone sealant is extended, it puts less stress on the substrate and on the adhesion bond line than a high modulus sealant.

WIKIPEDIA explains modulus as so;

Specifying how stress and strain are to be measured, including directions, allows for many types of elastic moduli to be defined. The three primary ones are:

What is Low Mod Silicone?

Are there different types of Low Mod Silicone?

Methyl Ethyl Ketoxime (or MEKO) is released with the Oxime curing systems, whereas, an alcohol is released with the Alkoxy curing systems, both technologies are neutral cure in nature and as such they are both non-corrosive substances. There are some subtle differences as a result of the chemical composition of each product which can affect the performance and declarations on the safety data sheets.

Skinning and working times with the two different products whilst curing.

Oxime: You would often find that Oxime based technologies typically form a skin quicker than Alkoxy based systems.

Many types of Oxime will form a skin in around 10 minutes in normal conditions and even faster in higher levels of humidity. This can have both advantages and disadvantages, it may well affect the tooling ability of the product, once a skin is formed the product can become unsightly to tool as the skin drags.

However, it can also protect the product on active construction sites with many different particles in the air.

Alkoxy: On the other hand, products produced with Alkoxy technology forms a skin slightly slower (15 – 20 minutes on average) allowing the user to tool the joints around, for example, window frames fully before a skin begins to form, thus giving the applicator adequate time to seal longer runs prior to tooling.

Judging by the comments of our professional applicator customers, many prefer the tooling characteristics of Alkoxy products as ‘they more body’ and with the extra working time, make them ideal when sealing externally on building façade.

The selection of which technology is in the low mod silicone used, (either Oxime or Alkoxy) comes down to personal preference.

With all sealants there can be differences in quality and LM’s are no different. One of the techniques to reduce the cost of the finished product is to add “extenders” to the base product which will reduce the performance, including loss of volume, extension and elongation (and ultimately the price!) so it’s crucial to remember that not all LM’s are the same when comparing “Like for Like”.

What is Low Mod Silicone used for?

As already mentioned, LM’s offer less resistance to stress, meaning that they stretch efficiently with movement. This is especially relevant for structures’ substrates which exhibit a consistent strain due to changing temperatures, weather and other variables.

With this fact taken into consideration, Low Mod Silicone Sealants are frequently used for external applications such as expansion joints between vertical brickwork, blockwork and render finished walls, with additional work being done in in horizontal joints such as sawn-cut expansion joints, perimeter floor joints and between poured concrete slabs.

With excellent adhesion on a multitude of materials such as glass, Upvc, wood, aluminium, steel and other metals, LM’s are the go-to choice for sealing around frames in windows and doors at the connecting joints where the frame meets the wall or other vertical substrate.

As well as the outer edge of framework, certain LM silicone sealants are used extensively for glazing applications, both at the production stage and in-situ. With a neutral (non-ac id) cure, Low Mod Silicone Sealants can be used for glass to glass joints and for waterproofing the gap between the glass and the containing frame.

You’ll often find the roofing trade preferring Low Mod Silicone Sealants over other materials for their compatibility with lead, excellent adhesion to tiles and again, for their superior movement capabilities. The joints between the flashing and the parapet wall or other vertical structures are often a weak link in the waterproofing chain and thus a silicone rubber seal cap works especially well as a belts & braces solution.

Quality LM silicones are commonly used for weathersealing the external facade (curtain wall) of all types of buildings where glass, stone, brick, timber, composite or other materials are used. These materials are attached to the outer shell of a building with a feather edge overlap or flat minimal joins which are usually then sealed with Low Mod Silicone to match or contrast the substrate. One such material we’re often asked to colour match is Marley Cedral weather board.

Although not commonly considered for internal sealing, LM’s can be used for many internal joint applications where appropriate. For example, lots of professional applicators and glaziers prefer to use Low Mods for internal glazing, with one application in particular being internal partitions.

Internal natural stone applications can be anything from swimming pool areas and sanitary ware in bathrooms/wet rooms, to kitchen areas such as worktops, trims and splash backs. All these high humidity areas generally require the addition of an anti-mould additive and where a natural stone is present (such as granite, sandstone, quartz, gneiss, slate, or porphyry and marble) a certified non-staining, neutral curing low mod silicone sealant is necessary to avoid leeching from the material to the substrate!

Low Mod Silicone is not just suitable for heavy duty construction joints but is also ideal for sealing and/or cosmetically finishing various fixtures etc. An example could be,, around the outside of a timber, metal or foamex sign on a brick wall, to protect the edges from weather decay and finish the aesthetics. (As per picture below) 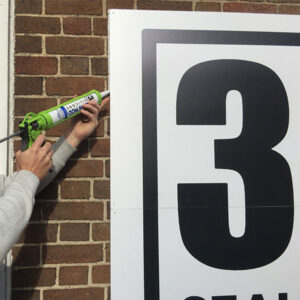 A much overlooked use for a Low Mod Silicone Sealant is to make a final seal to the joints between wooden structures such as sheds and summerhouses to their concrete and/or timber bases where excessive moisture and rain travels and gathers. Applications such as these are serviced well by a large fillet joint and best applied when both the substrates are bone dry and free of dirt & dust etc.

Which Low Mod Silicone products are which?

There is no better or worse cure system for Low Mod Silicone products, just different characteristics that make the choice an individual preference. Below is a quick product guide to some of the most popular Oxime/Alkoxy LM’s on the market today. Please note; we don’t stock all of the products listed, some are merely for reference…

You can see a comprehensive list of our entire mastic sealant range here.

Which colours does Low Mod Silicone come in?

In general the colour ranges of Low Mod Silicone Sealants accommodate the most popular materials used in the common applications. Pound for pound this would mean external frames and the substrates that surround them. You’ll find White is by far the best seller in any LM’s available with Black, Anthracite, Dark Anthracite, Grey, Mid Grey, Buff, Portland, Brick Red also selling well throughout the seasons.

As the natural stone sealants are designed to match a multitude of different shades and textures, they tend to have vastly extended ranges with a select few even offering matt finishes and/or physically textured materials.

A special thank you to Hodgson Sealants from County Construction Chemicals Ltd.

As mentioned at the top of this blog post, a large contribution was made by Simon Hodgson of Hodgson Sealants for the entire article, for which we thank him kindly.

Hodgson Sealants have their own Low Mod Silicone Sealant called Silfix U8 available directly online here. Simon signed off with the following statement…

“Hodgson’s new professional range is based on the Alkoxy curing systems, this is all part of Hodgson’s commitment to high quality product, service and innovation.” 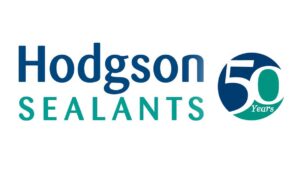 We’ve made the often close knit world of Mastic Sealants, a bit more,,, Social, in the form of...

We have a long relationship with matching sealant colours for our customers at County Construction C... 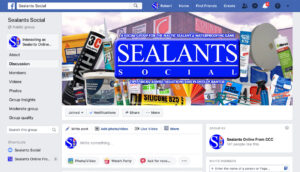 Perry Jones
09:05 23 Mar 20
Bought the Glazing Sealant am in the trade good product. However also bought a Palau tool which did not come with the... sealant. Thought that it would come separately then I forgot about it rang up for more of the sealant then realised they did not deliver the tool, less than £10, so asked for it they said 30 day rule won't honour the order. Asked for the manager waited couple of minutes the same guy came on the phone and reiterated the 30 day rule. Luckily it is only £10. Good product but bad customer service. As they are unreliable will try and source elsewhere their polymer silicon product. Buyer beware, computer says no etc etcread more

Stefan Kasprzyk
13:38 26 Oct 19
If you need sealant...well this is the place. Knowledgable, helpful staff.

Callum Fisher
08:19 10 Sep 19
A mind blowing array of mastics, from decorators chalk to high end natural stone sealants, this company have got... everything you'd need as a professional or home user. I've been using their own brand 3C Sealants Low Mod & HM for a while now, I've placed several orders and never had a problem. Very impressive customer services and good to deal with also. Their sales fellas are very helpful and friendly if you need to ask any questions also. Thumbs up, recommended.read more

Malcolm Bates
16:42 16 May 19
This company must get a 5 rating, superb service... I initially emailed them for advice on sealing polycarbonate to... roofing felt. Dave gave me great advice and I ordered from them. Good price too.. On day of due delivery the courier failed to deliver and was eventually 2 days late. During this time Mike could have done nothing more to ensure the issue was satisfactorily addressed ASAP. He chased the courier and kept me informed right up to time of delivery. Thank you for a great service!!read more

matthew treglohan
15:35 22 Feb 19
Went to see these guys last month and wanted a super strong glue to stick some coping stones down when the mortar had... failed, was advised to buy some 3C Max-Bond Adhesive. Easy to use, excellent fast grab capabilities and stuck perfectly! Still in place and still doing it's job well! Have been back to see these guys since and got some other stuff.read more

aaron wingrove-littman
09:11 14 Feb 19
Used Sealants Online a few times for various accessories for work and the odd bit of material for jobs at home and have... had an excellent experience so far. Always do the click & collect option to save the delivery cost and they open at 6am which is great for me! Top company to deal with.read more
Next Reviews

Check Out This Product? 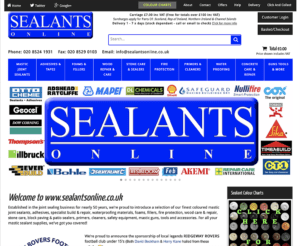